LOTS of out and about-ing this week! Partly in a masterful effort to avoid some work, but mostly just trying to enjoy the opportunities afforded by being here in Glasgow.

Monday November 14: Dec Mod meeting went well! We really came to play this week in our discussion of women in decadent literature. While not all of our reading list included works by women we took a look at the attitudes towards women as both characters and writers. Basically Bram Dijkstra lays it out as:

In the eyes of many fin-de-siècle males, woman had become a raving, predatory beast, a creature who preyed on men out of sheer sadistic self-indulgence[…] For many of the intellectuals and artists of the years around 1900 it was not enough to portray a woman as an empty-headed–or even empty-hearted–burden whose very existence was a regressive influence on man […] If within the world of late nineteenth-century evolutionary advances she were to be allowed to continue to have a voice, progress might still be aborted […] Woman, the intellectuals wanted the world to know, was the Beast of the Scriptures, evil incarnate, an animal–and, worse, a veritable connoisseur of bestiality

So that’s lovely, and we had a good time tearing into it alongside works by Vernon Lee (male pseudonym for Violet Paget) and Edith Nesbit.

Tuesday November 15: When we brought our passage to class it seemed as though we were perhaps the only group who was really into the readings this time. Anyway, I think we had a good time bashing the texts around and trying to make connections to degeneration, Gothicism, and other topics from previous weeks. Final essays are FAST approaching and I do not have topics chosen. That is currently a ginormous stressor, especially because finals are supposed to be twice as long as midterms. I was/am stressed enough to need cake, so I made one! Vanilla cake with tart raspberry filling and sweet raspberry buttercream frosting. 🙂 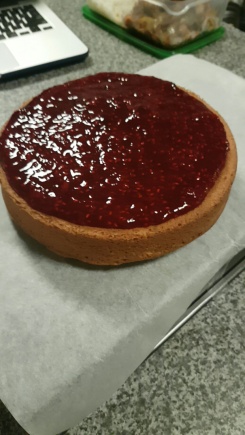 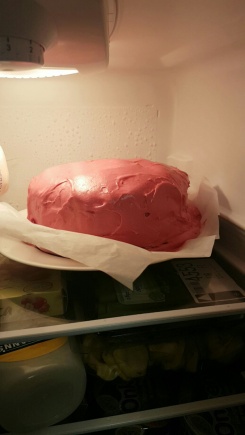 Wednesday November 16: First day of Fantasy Film Club! Instead of the critical lectures we’ve been having every Wednesday, we now have Fantasy Film Club. This week was Pinocchio! We watched the Disney version and then had a discussion afterwards. An altogether pleasant way to spend a morning. There was a poster up for a Hootenany which looked like a great time, but the 17th already had plans lined up.

Having an early movie and thus an early end time meant that the sun was still out during the walk home. Sort of. It’s no joke that you can get all seasons in a day here. The photos below were taken about 90 seconds apart. 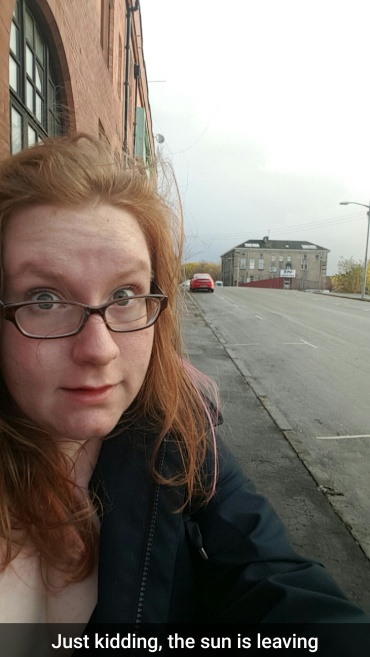 We had our study group at 10 and class 11-1. Kaitlin, Bettina, Ingrid, Elena, Beatrice and I had lunch together after class and then split up to get our abstracts written for the STUPID research training seminar assignment. We were feeling quite productive and pleased with ourselves as we headed to see our guest lecturers. 4:15- 5:30 was a conversation with Ellen Kushner and Delia Sherman, two American fantasy writers and champions. Ellen Kushner is the author of Swordspoint, and the copy I had brought was the first she’d seen of the new edition!

FANTASTIC BEASTS AND WHERE TO FIND THEM PREMIERE EVENT!

Originally I was planning on going alone, but about 15 minutes before I was going to leave, Meg and Jafet were convinced to join me.

Our tickets included a drink under £5, a buffet, and the premiere showing.

You can see that the event was happening on Ashton Lane, a place I alone of the flatmates had not yet been. The strings of fairy lights make Ashton Lane feel like a happy liminal space and I absolutely loved it. 10/10 would go back.

So we started at Ketchup with food and drinks. The bar was decorated to perfection, it felt like Hogsmeade. We got a little booth in the corner and went to town on food and drinks. You’ll see from my captions that I was really feeling the exclamation points. 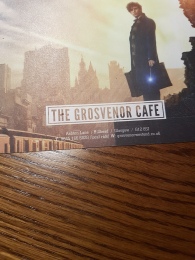 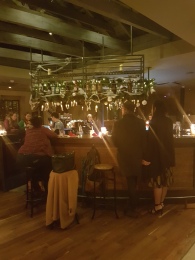 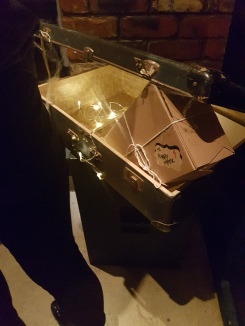 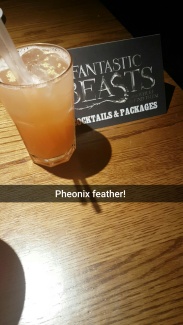 Once plied with food and drink we headed over to Grovesnor Cinema. None of us had been there before, so the size and seating were both a surprise.

In terms of a review, well… ALL OF THE BEASTS ARE PERFECT. I love them all. I’m a bit uncomfortable with how white everyone was…especially in 1920’s New York. Also, an odd juxtaposition of the MACUSA president being a black woman, while everyone seemed totally down with extensive use of house elf labor. Anyway, I also do not see how they’re going to get 4 additional movies out of this, but I suppose the dead horse hasn’t stopped spitting out money yet, so.

By the time the movie was over and we’d mostly made it home, poor Jafet was dead on his feet. Meg and Jafet had classes and stuff on Friday, poor things. ❤

Friday November 18: A sleeping and puttering around at home day. Exceedingly pleasant.

Saturday November 19: Jafet came home in the afternoon with SKI CLOTHES because he’s so cold. 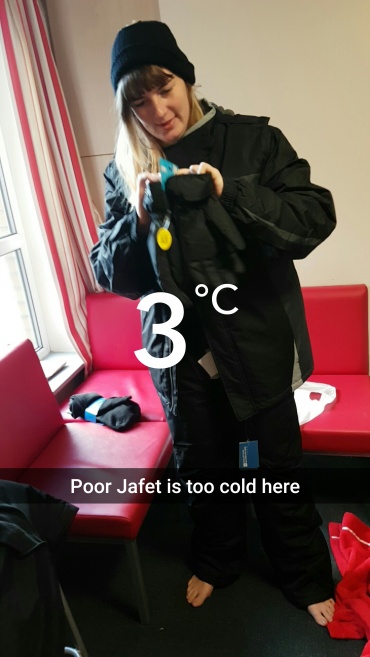 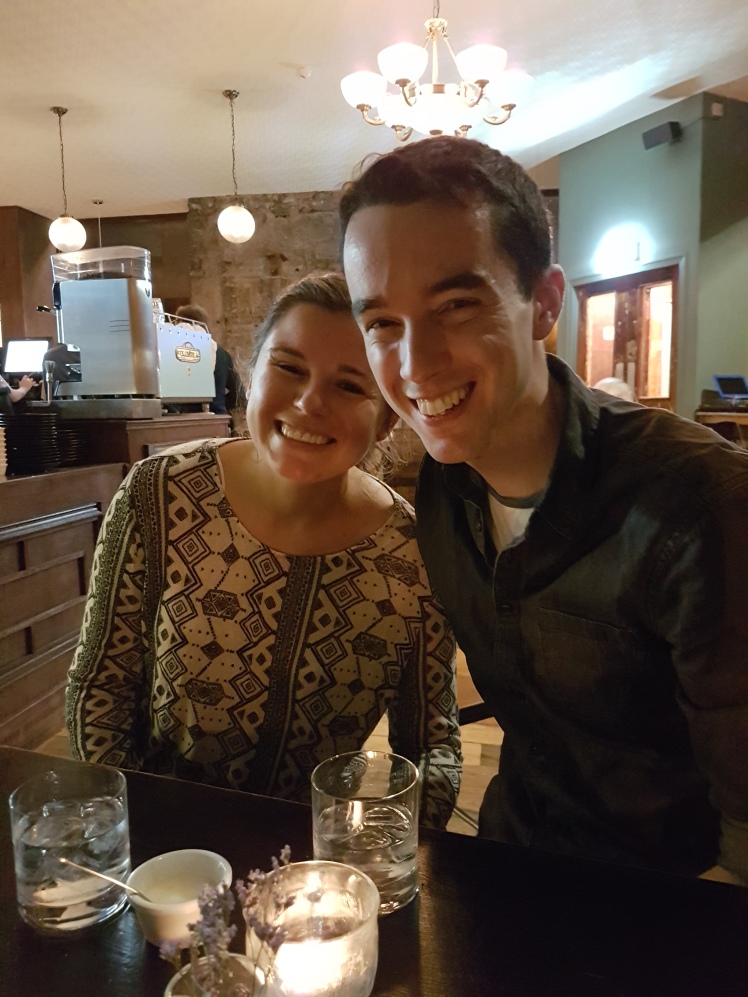 We went out for dinner before all heading out to different evening entertainments. I was off to the Glasgow Royal Concert Hall for a night at the symphony! 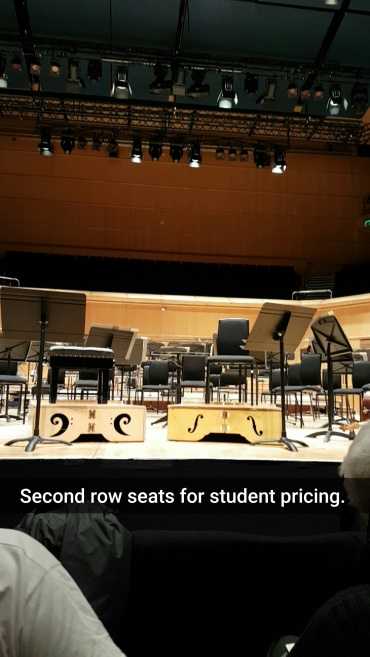 I was miffed about having to pay for a program, but I’ve taken pictures of the contents so you can see what was on. 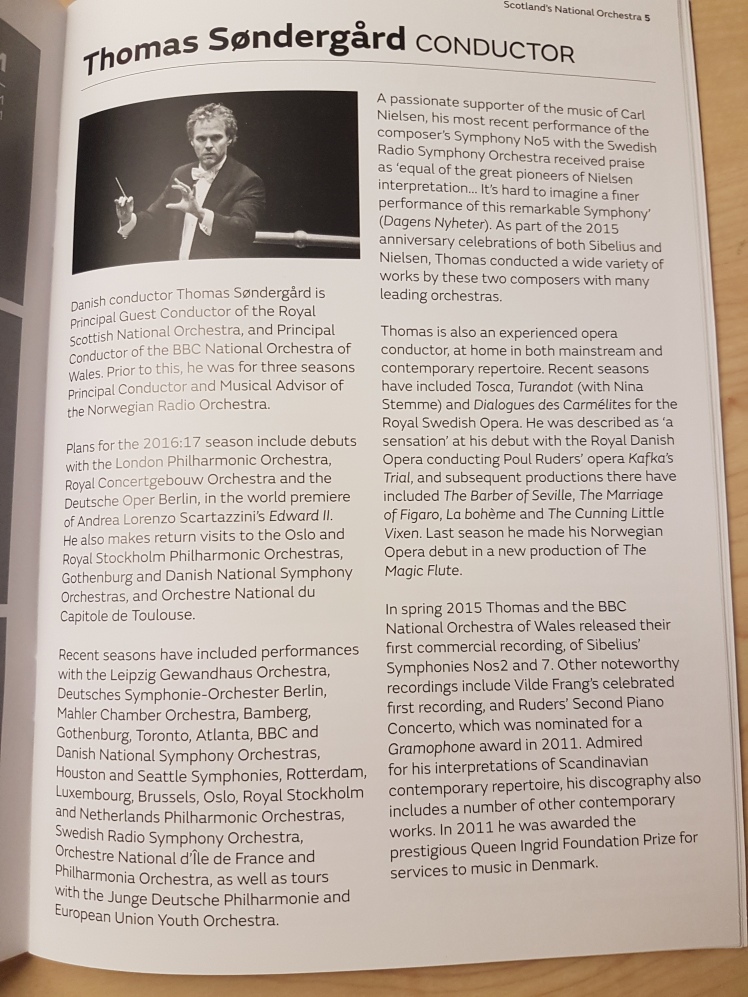 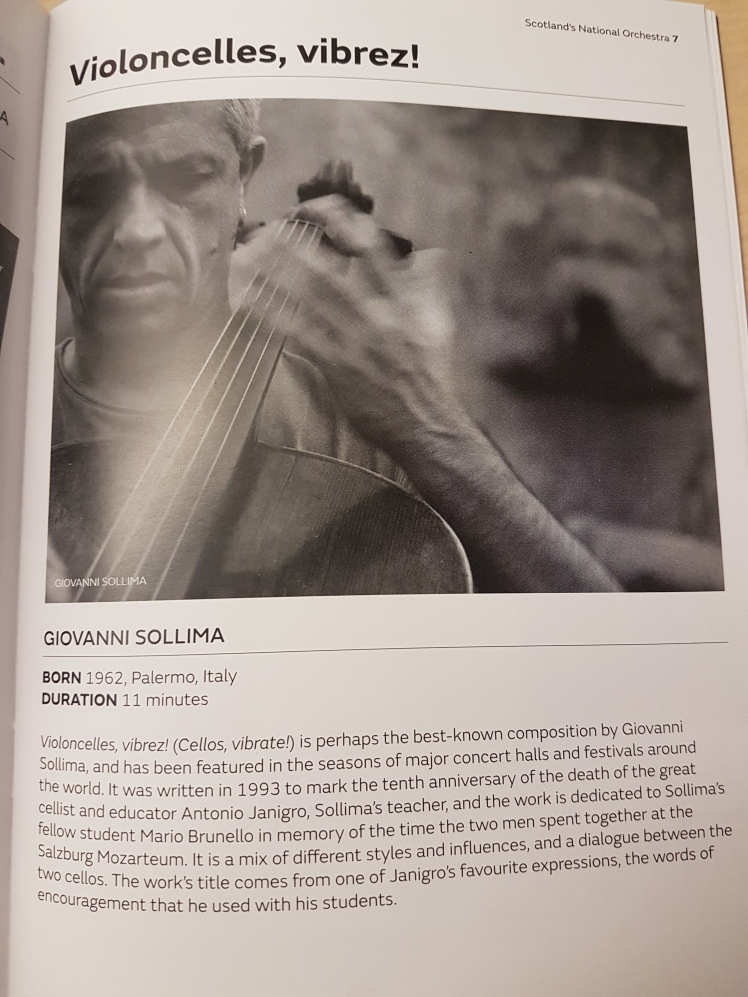 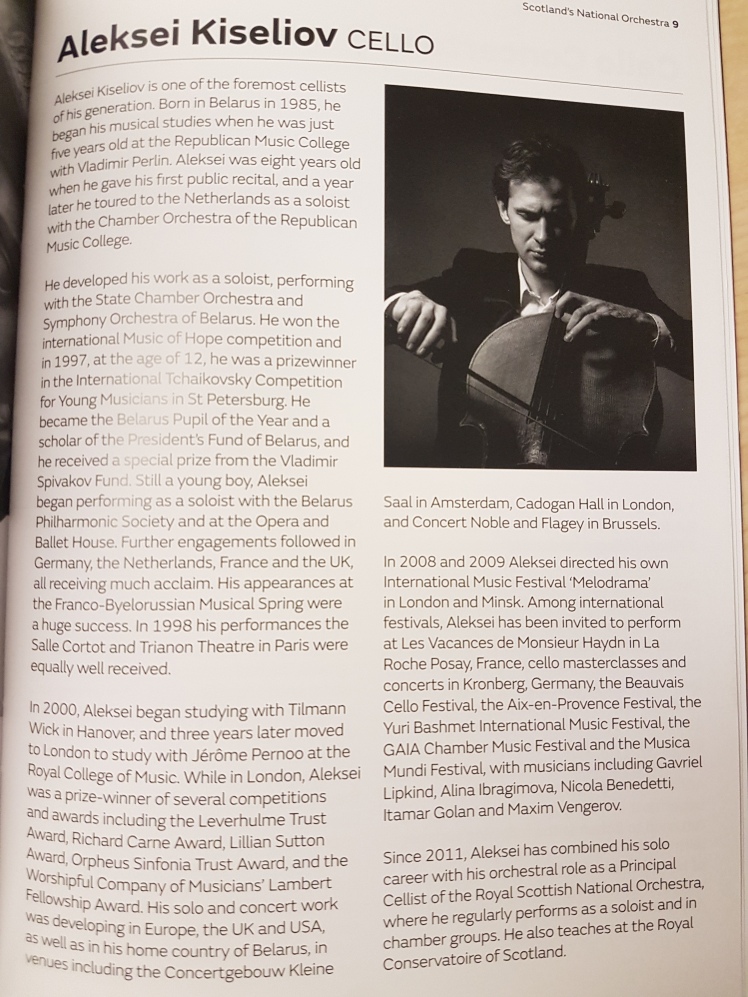 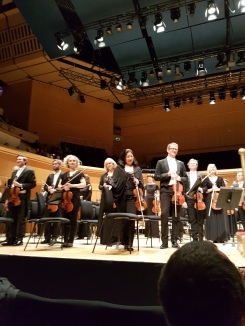 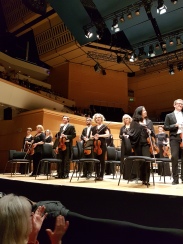 The whole concert was wonderful, but I must give specific praise to the RSNO’s dynamics. OH MY GOD, they were precise and together and dramatic as all heck. Beautifully done. Also, the flautist, Katherine Bryan, sounded absolutely gorgeous in both her solo moments and general orchestral moments.

It was fun to watch Giovanni Sollima play… he’s VERY expressive and it’s easy to see how much he loves what he does. The audience loved him too, and after three rounds of applause for the cello concerto he came back out and did a Jimmy Hendrix encore!

All in all it was a wonderful night and a really fun week. Here’s hoping midterm grades come back with good results and I come up with a perfect and interesting set of paper topics. Wish me luck, check in next week for possible grades and pseudo Thanksgiving plans.