Wow. Another presentation down, two papers to go! This week was split pretty evenly between academics and goofing off, though to be fair, this week’s goofing off was pretty productive and impactful. Let’s get going, yeah?

Monday October 10th and Tuesday October 11th: On Monday, Team Supreme met at the Gilchrist to plan our presentation. The assignment was to identify the argument and evidence within a scholarly article, then evaluate the impact and effectiveness of the piece. The subject of the week: Wilde’s The Picture of Dorian Gray and the concept of Decadent Sexualities. The article we were assigned was written by Elizabeth Lorang, called “The Picture of Dorian Gray in Context: Intertextuality and Lippincott’s Monthly Magazine”.

Two quick things…Firstly, my course title is Victorian Literature–Decadence and the Modern, which I write as DecMod in my calendar shorthand. Secondly, no, I’m not yet able to fully articulate the intent of the course. If I were to attempt it now I’d say that we’re examining novels/poems/essays/etc which are concerned with morality, beauty, art, and identity. We’re evaluating them perhaps most in terms of how they break from the literature before 1890 and how they shape the ideals, conventions, and conversations of the turn of the century.

Anyway, Team Supreme (Beatrice, Nicola, Kaitlin, and myself) whipped up a solid presentation and spoke in front of the class on Tuesday. The premise of our article was that Dorian Gray was originally published in a periodical, Lippincott’s Monthly Magazine, and should be read as part of the conversation magazines create within their pages. Lorang calls for an intertextual evaluation of Dorian because she sees connections between the social interests of the time and the rest of the content in the magazine. Published in both Britain and America, the 1890 Lippincott’s were not identical. Lorang focuses on the British version, identifying three additional pieces published in the magazine which she feels situate Dorian in a historical context:

If you’re interested in Lorang’s article, here is the basic outline of our powerpoint. We spoke around the quotes, explaining the connections Lorang made and tying it all together.

Historical Context: Intertextuality and Society’s Fascination with the Occult:

“The Indissolubility of Marriage”:

SO, that was quite a bit for the start of the week. Kaitlin and I were much relieved to be done with it all!

The walk home was lovely, a surprising number of things are still in bloom, considering it’s dropping into the low 40’s, high 30’s at night.

Meg and I went for a walk along the river a few hours later so you can see the Science center, the BBC building, the bridge, and the exhibition center by night! 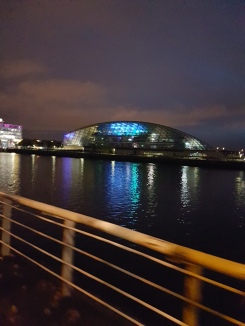 Honestly, I’m such a huge fan of buildings with color-changing lights.

A relatively easy day! Our lecture was on the theorist Farah Mendlesohn and her four-part classification of fantasy. Mendlesohn explores the effectiveness of identifying fantasy texts as portal/quest fantasies, intrusion fantasies, immersion fantasies, or liminal fantasies. Her book, Rhetorics of Fantasy, is a straightforward read and I highly recommend it. I am considering working with her text for a later essay in the course.

My bank card arrived, setting the stage for my indulgences later in the week! First thing I did, however, was buy a £3 ticket to meet Garth Nix, author of The Old Kingdom Collection (Sabriel and Abhorsen being two of the more famous titles). Garth Nix will be in Glasgow on the 24th to talk about his new book Goldenhand, and I will be at Waterstones to hear him!

Surprisingly enough, DecMod and Fantasy synced up this week, with The Picture of Dorian Gray as a primary text in both courses. In Fantasy, however, we examined the text under the week heading: Gothics. We discussed what it means to be Gothic, how Wilde expresses concern about soul, heart, sexuality, beauty, what elements make the story Fantastic, and so on at length.

I intended to go out with my flatmates afterwards, but we were all too exhausted. Our kitchen time is really nice though, crowded, but domestic. 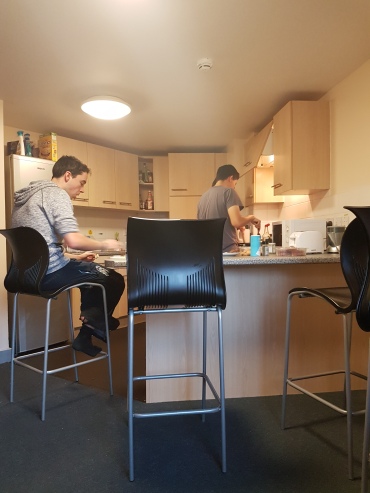 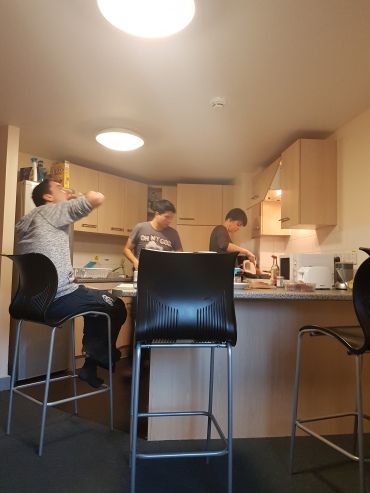 This is my new ladle, isn’t he perfect?

So the academic part of the week drew to a close with friends and food and wholesome family fun. (No worries family, all my fun is wholesome and above board)

OKAY, the crowning part of Friday was finalizing Christmas plans with Meg. 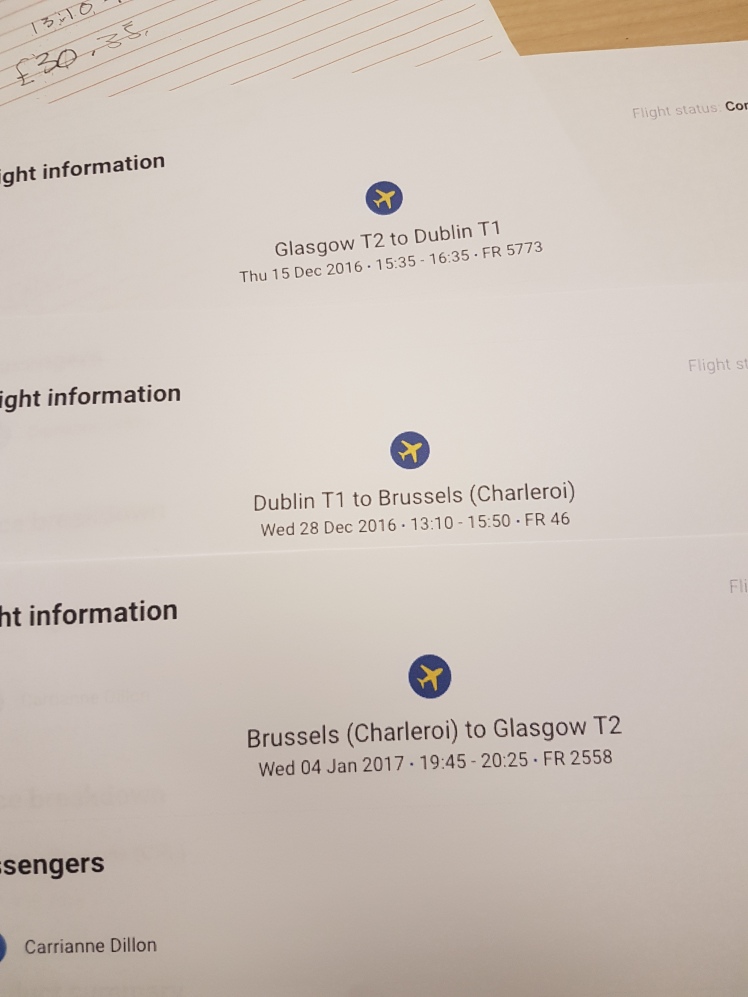 Doesn’t that look like fun?! We found cheap flights, our accommodation is covered for the most part in Ireland, and we’re looking at AirBnB’s in Brussels 🙂 If you have any connections or suggestions I’d love to hear them. Comment and Follow so I can keep track! Neither of us have been to Brussels before, so since we’re unlikely to be conversant in Flemish by Christmas, I think we need to brush up on our French.

Last week Dr. Maslen indicated that he was interested in going to the Glasgow Film Theatre to see several movies this weekend and asked if anybody on the course was interested in going along. Plenty of people said that it looked like fun, etc. but apparently I was the only person who actually bought two movie tickets! So, yesterday and today I had Dr. Maslen all to myself, and we saw Kizumonogatori Pt 1&2, and Anthem of the Heart. Both movies were great, I particularly liked Anthem of the Heart because they managed to arrange Beethoven’s Pathetique layered with Arlen’s “Somewhere Over the Rainbow” and it was gorgeous. I’d link the youtube video, but that would spoil the ending of the movie! And of course it was amazing to socialize outside of the classroom. Another advantage to everyone else passing this up was that I could vent a little bit about not yet having a topic for the midterm essay. Dr. Maslen assured me that he hasn’t written the paper he’s presenting in Athens next week, so not to worry that I haven’t started on the one for him due on Halloween! We talked through a few of my ideas and agreed that some were more suitable for longer papers, and that I still need to narrow the focus of one of the stronger ideas.

The GFT was about 1.5miles away, a lovely walk even in the dark last night or in the rain this morning! 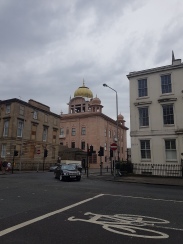 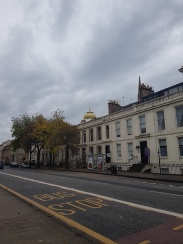 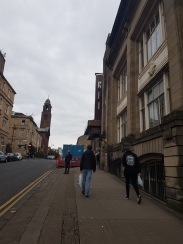 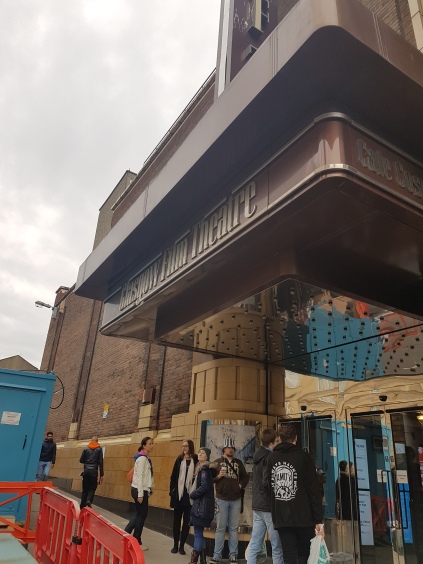 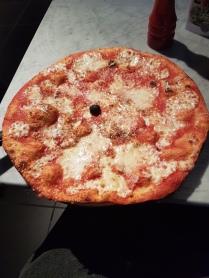 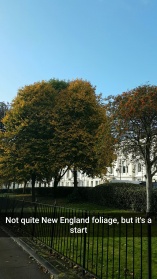 On the way to the theatre are some beautiful buildings, and on the way home today was a beautiful pizza! I swear to you, ten minutes before the pictures in the bottom right corner is was POURING rain. My wellies got their day in the sun…well.. you know what I mean, and they were hugely successful. The whole week was successful, actually!

Don’t look for a post next Sunday, I’ll be away next weekend in Skye! I will likely do a post about next week and a separate post for Skye and Garth Nix, so stay tuned. Follow the blog to be notified of updates and leave a comment if you like what you see. ❤

5 thoughts on “I’ve Survived Through Week 5”